Bridging the Gap Between Community and Academia: The Role of Participatory Action Research

Academic researchers are a strange breed. They sometimes wear funky cardigan sweaters, bowties, or white lab coats (or maybe just chemists?); carry around red pens and clip-boards; use words like “datum” and “generalizability,” conduct experiments – ahem, studies – for reasons that are usually not made explicitly clear, and publish papers that often remain unread. Most people don’t have anything against them. After all, the majority of researchers are smart, passionate about what they do, and have nothing but good intentions. No, really, they seem all right. It’s just hard to figure out what it is they really do. 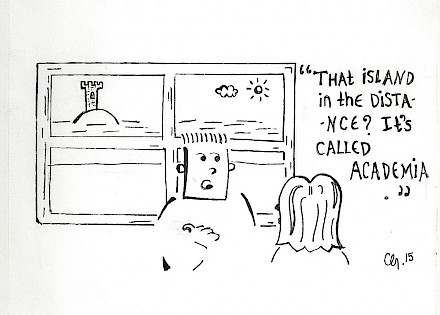 The gap between academic researchers and the populations they study has been discussed by various thinkers and, well, (you guessed it) researchers. The “ivory tower” analogy is often used to illustrate the extent to which research can be disconnected from the community in which it takes place. Researchers drop in, take a look around, conduct their studies, identify what they believe are the main reasons for doing the research and what is so problematic with the previous research (thus, justifying their own methods), and then provide future directions for someone else to handle.

There are many problems associated with the aforementioned approach. First, this traditional model has the researcher in its very centre. As I’m sure you can imagine, having such an intimidating figure around is far from ideal if, let’s say, a project’s goal is to empower the members of a community who don’t usually make their voices heard. Who would want to feel like that shy kid in a 5th grade class who finally raised his hand to give an answer, only to have Mr. Brown roll his eyes and sigh in utter irritation “Oh, Timmy… Anyone else?” Yeah, exactly. No one. Me neither, by the way.

Second, the project designed by the researcher (and the researcher only) might simply not be very good. Truth is, as intelligent and educated as they are, academics are not always in tune with what is going on in particular communities. The questionnaires they develop or select, for example, might not be entirely relevant in certain cases. Wording may need to be changed to accommodate languages and customs. Different recruitment methods might have to be employed.  And sometimes the whole premise of the project might have to be re-examined because, well, to put it bluntly… nobody cares (sorry— it had to be said).

So… What now? Is this it? Is there no way out? Are we doomed to live in a world where research and real life form as homogeneous a mix as oil and water? This does not need to be the case. Methodologies that challenge this somewhat antiquated model of research continue to gain in popularity, shake things up, and create meaningful change. One of those methods is called Participatory Action Research, or PAR for short.

PAR consists of hiring a relevant stakeholder to conduct single or multiple phases of an experiment. Those stakeholders can range from local community members to service providers to local politicians, depending on the project. They might be involved in design, participant recruitment, presentation of results – any task that the researcher deems better suited for someone with greater local and cultural knowledge. An example of PAR that has been used in our Youth and Family Research Lab was hiring young adults previously deemed “at risk” for homelessness to recruit and interview homeless adolescents as part of a study. It’s hard to imagine those same adolescents being willing to confide in a bespectacled professor wearing a collared shirt and a nice watch… Awkward. That is, in fact, one of the main strengths of PAR: by including community members to be involved in very direct ways, researchers can greatly improve the reach and relevancy of their project. Let’s face it: professors may be smart, but there are some things they’ll just never be able to get (and even if they once “got it”, being in the ivory tower for any length of time changes their perspective substantially). Conducting research in this manner allows universities to establish constructive relationships with the communities it studies. The communication begins to flow in both directions. Trust sets in. Little by little, the two sides come out of their shell.

While I do have a soft spot for it (can you tell?) and truly believe that it is a valuable and exciting way of doing research, PAR is not a panacea. It is not enough to completely turn around the future of academic research and it certainly cannot single-handedly rebuild its tarnished reputation. After all, this methodology has been around for a while and the research-academia gap still exists. But the gap is smaller than it’s been. It’s narrower. It’s shallower. And slowly, one brick at a time, it might ultimately be inclusive and engaging methodologies like PAR that finally erect that bridge.